Got hit by a damn car

Some nights, it doesn't pay for a dragon to get out of bed.

Got up, and couldn't find my keys, anywhere. I always put them in the same place, on the hook by my light switch, but they weren't there. Ma was asleep, so I couldn't ask her. I turned the apartment upside down. They were nowhere, just vanished.

I was going to be late, again. One more ding on my record and I'd be looking for another job. Not good. I like this job. I know it's weird, but I do. At least I can help a few people, sometimes.

I was running out of time. With 20 minutes left, I realized I'd never make it on time even if I found my keys. So, I gave up, and slipped out my window to the fire escape. I live in the tallest apartment building in downtown. Went straight up to the roof, doing my best to avoid the railing section that screeches when you lean on it, right next to Mrs. Del Conte's window. She's my landlady, and she's got the loudest, yappiest Pekingese in Austin. I'd hate that dog if it wasn't so darn cute.

As soon as I hit the roof, I unbottoned my uniform shirt, and took it off so I could get my wings unfolded without tearing it. Tucked my shirt into the back of my pants so I wouldn't lose it. It was well after 11 at night. The street lights keep everyone blind to the sky in the city, so not much danger that anyone would see me.

I'm not my dad. I can't do the full dragon thing, or I don't know, maybe I just can't do it yet. I'm still pretty young the way dragons count things. I can't quite fly. Can't just, you know, jump up and flap and lift off from the ground, although I can jump a couple stories with wing assist. I can also glide better than any hang glider ever dreamed, even gain some altitude if I catch the thermals right. 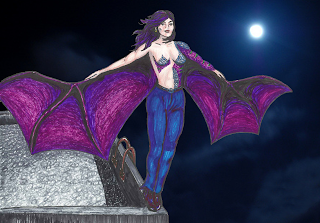 It felt so good to stretch my wings and catch the air, cold as a well-digger's ass this time of year, but the cold's never really bothered me much. It's just a different kind of swooshy feeling as it flows under my wing membranes. It's beautiful up there in the sky, and so perfectly peaceful. Everything pauses and the world takes a deep breath. I wonder sometimes why dad ever came down.

There's a little park right across from the hospital. Should have been empty that time of night. I tilted my right wing and circled to shed air speed, then flapped backward hard just before my feet touched grass. Light as a feather. Dad would have been proud. I was grinning, all pleased with myself for the perfect landing, and looked up ... right into the eyes of a homeless guy, sitting leaned up against a tree. He was huddled under every piece of clothing he probably owned until he looked like part of the landscaping. He had on a goofy red knit hat with strings dangling on either side of his face tipped with little pom poms.

"Uh, Hi." I snapped my wings closed and waved at him.

He looked dazed, but he waved back.

Hopefully, he'll assume the half naked, partially scaly winged girl he saw was a result of whatever he had to drink before camping here.

I had bigger problems. The cell phone in my pocket read 11:57. I had three minutes to show up to work on time. Threw my shirt over my shoulders and ran, buttoning as I went.

I realized half way across the road that I got the buttons done wrong, stopped for a second to undo them. Dumb, really dumb to stand in the middle of the road, looking down at my buttons. Don't know what in the world I was thinking.

Some guy in an F150 pickup going way faster than he should have been going right in front of a hospital clipped me hard with his right front bumper. Threw me about 15 feet, clear over the sidewalk and into the wall. That really hurt. I was bruised for hours. And my uniform pants got ripped. Who goes that fast in a hospital zone anyway? I mean, besides us. But we have flashy lights and sirens, and a good excuse.

The guy slammed the brakes and jumped out to come check on me, but I ran for it before he got a good look at me. Made it into the building, but the boss still yelled at me for being late. And, for showing up looking like I slept in my uniform, and rolled in the dirt.

Some days, it just doesn't pay. Boss said they're too short-handed to fire me. Got that going for me, I guess.

Here's the kicker. After my shift, when I got home, I went to grab a couple slices of leftover ham out of the fridge, and found my keys next to the milk.

Paige E. Ewing
Austin, TX, United States
I write science fiction, fantasy, romance, superheroes, and whatever else leaps into my fevered imagination. Working on an urban fantasy with a were-spider heroine.

Get "The Protectors" anthology!