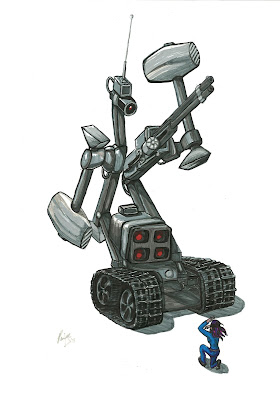 The other robot, ripped asphalt with its tracks as it accelerated toward the one remaining threat. Me.
Two machine guns, two giant smashing hammers, and a four barrels as big around as my thighs all swiveled toward me.


Shit.
To make life more interesting, while I’d been focusing on the two robots on this side of the dam, one of the robots from the other end of the dam had come across to reinforce its comrades.
I looked behind me, and right down the barrel of another huge gun.
I was so completely screwed.
That was when I saw the most extraordinary thing I’d ever seen. A dragon. I know, not that unusual for me, but the dragons I’d seen had always been more or less humanoid, wings, weird feet, scales and claws, notwithstanding.
Flying above the robot that was about to turn me into a greasy pavement smear was the biggest, most dragonlike dragon I’d ever seen. It was Fafnir, had to be. The red and black scales were the same. But he was easily three times as big as he’d been at the theater. And he was different. His face had distended, gaining huge crocodile jaws, his feet, lengthened until they had the ideal leaping shape of a kangaroo’s hind legs, his body became long and sinuous, and his hands grew proportionately huge. He looked like a drawing out of a children’s fairy tale. He had even grown a long scaly tail with spikes on the end.
He landed on the robot that was about to shoot me and bit its head off. His teeth crunched the video eye and what had to be the central processing area into metal confetti.
The other robot moved its massive barrel up and fired at Fafnir point blank.
Whump BOOM!
I ducked and crouched, covering my head with my scaled arm as chunks of robot zinged everywhere.
When I looked up, the robot Fafnir had beheaded was just a smoking broken hull with one lone track still intact.
Fafnir’s blood red and tar black scales looked untouched. Not so much as a scratch.
He inhaled deeply, pursed scaly lips, and blew at the other robot, like a kid trying to blow out birthday candles. A focused cone of intense blue flames with a blinding bright smaller cone of yellow at the center cut the robot in half as neatly as any cutting torch.
The heat was so intense from where I was that my hair shriveled and burned on that side.
The fourth robot had started across the dam, but stopped when it saw the destruction the creature out of legend had caused. It backpedaled, tracks spinning hard in reverse as Fafnir launched into the air, soared out over the side of the dam where the water was a tiny trickle far below, and circled up.
The robot fired its machine guns at him desperately, but they had no visible effect, other than the sparks as the bullets bounced off his scales.
He grabbed the multi-ton robot with his feet as he swooped by and dropped it over the side. It fell onto the rocks below and smashed into a million pieces.
Whoah. That was awesome!
So much for the robots.
But we still had to find the bomb.
More in a bit …
Dee Dragon
Posted by Paige E. Ewing at 1:22 PM No comments:

Paige E. Ewing
Austin, TX, United States
I write science fiction, fantasy, romance, superheroes, and whatever else leaps into my fevered imagination. Working on an urban fantasy with a were-spider heroine.

Get "The Protectors" anthology!